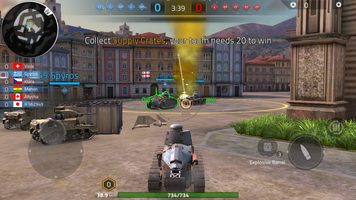 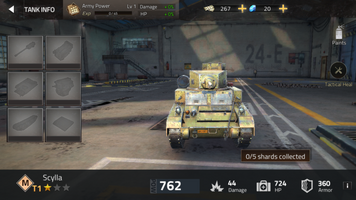 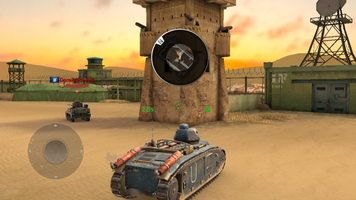 Pubblicità
Iron Force 2 is an action game where you get to jump right into thrilling combats between 3D tanks. To be successful, you'll have to prove you've got what it takes to drive enormous vehicles, while also attacking your enemies with all you've got.

The controls in Iron Force 2 are simple, so it won't take you long to get the hang of them. You just have to touch the virtual d-pad to move the tank and the action buttons to bomb the rest of your adversaries. The aiming process is also a piece of cake; you just have to hold down and move the camera until you have a good shot lined up.

Without a doubt, the thing that makes each round of this game the most fun is being able to create teams to make the combats even more exciting. Each one of the groups will be marked with the colors red and blue and in the upper part of the interface, you'll see a scoreboard with the total number of tanks destroyed. Plus, you'll get to unlock different skills as you go, which will help you be more effective in each attack and increase the damage you can make. You can invest the rewards earned in unlocking new pieces and elements that make you stronger.

With Iron Force 2, you'll feel the excitement of being involved in different fields of combat while you drive tanks full of power and abilities. With that in mind, you'll have to pay attention in order to complete each mission and take out all your enemies. That's the only way you'll successfully lead your team to victory.
Recensito da Carlos Martínez
Pubblicità